365 DAYS OF HANDWRITING AND OTHER PROJECTS 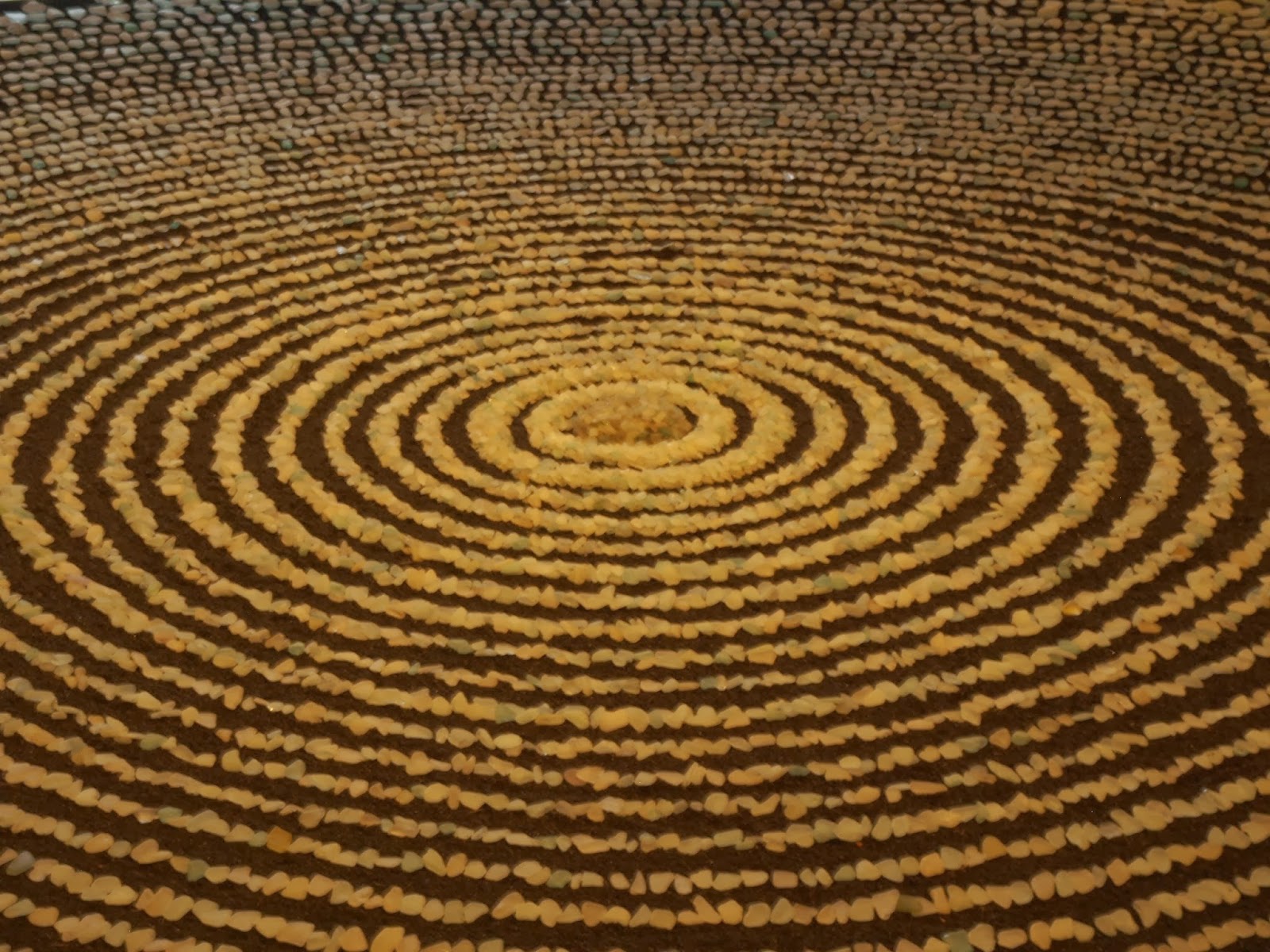 This project has started off with a lot of support and well wishes.   I have completed the handwriting sample books for the first two weeks of 2014.  In week one, instead of creating the book using only the samples in a vertical or horizontal designation, I decided to work with both and create the book around them. 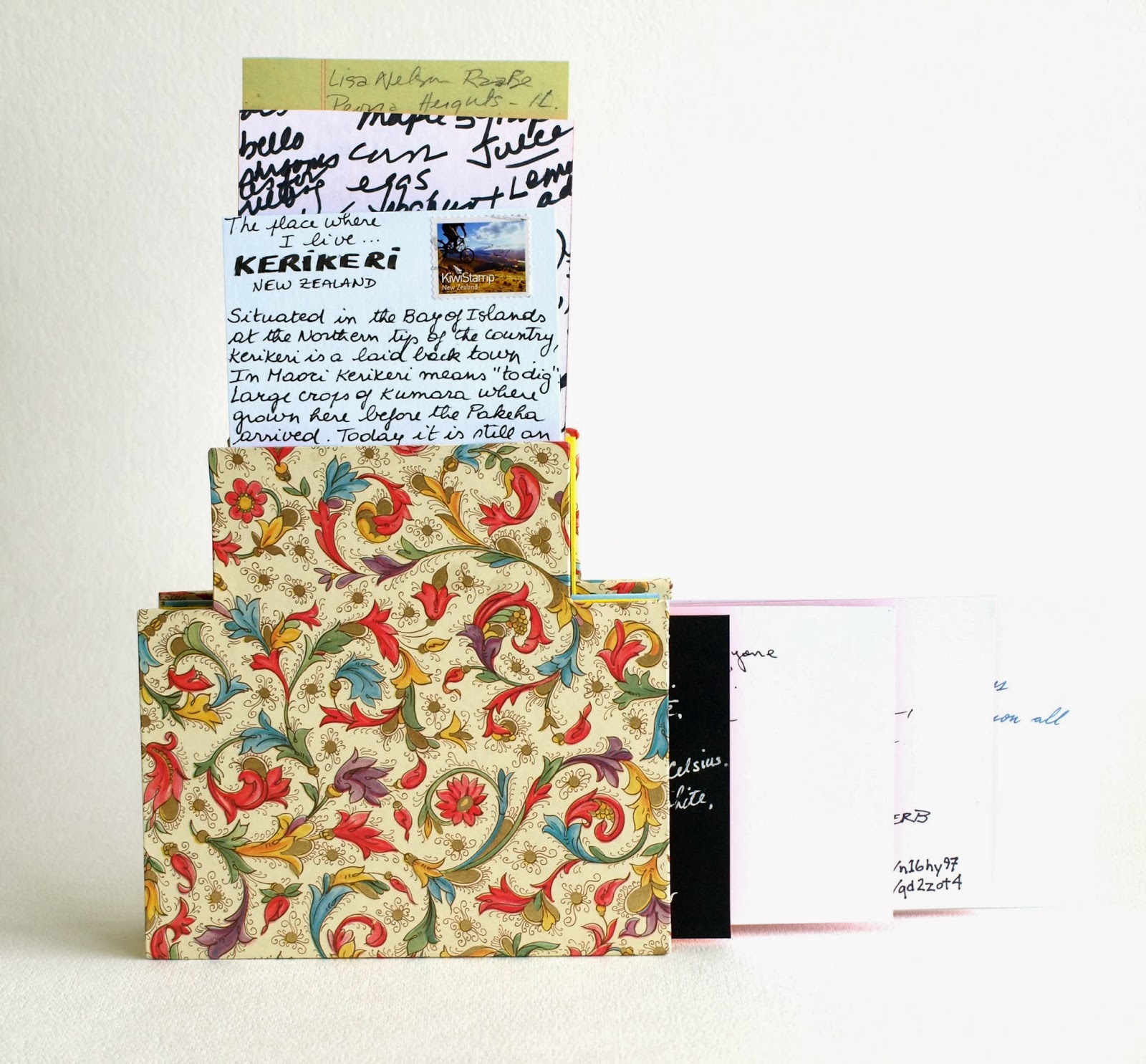 Working with both horizontal and vertical handwriting samples contributed to creating this shape. 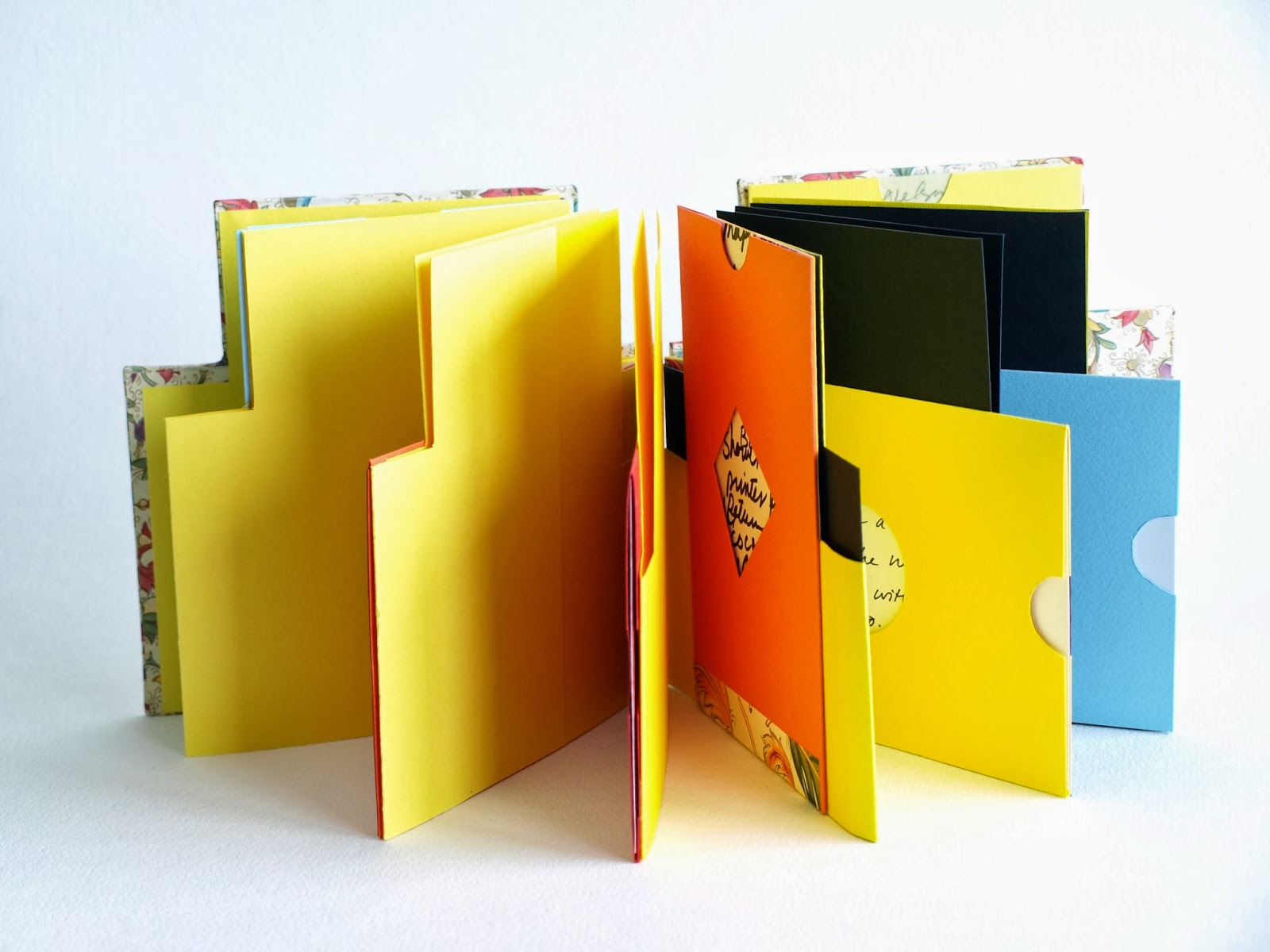 I decided on an accordion book binding. I mounted each handwriting sample on Fabriano card stock and created a pocket, for each sample, from the same card stock.  The samples slide comfortably into a pocket, so when the book is closed, all is neatly packed away.  When the book is open, some of handwriting from each sample may be seen, through the design I created, in the front of each sleeve. 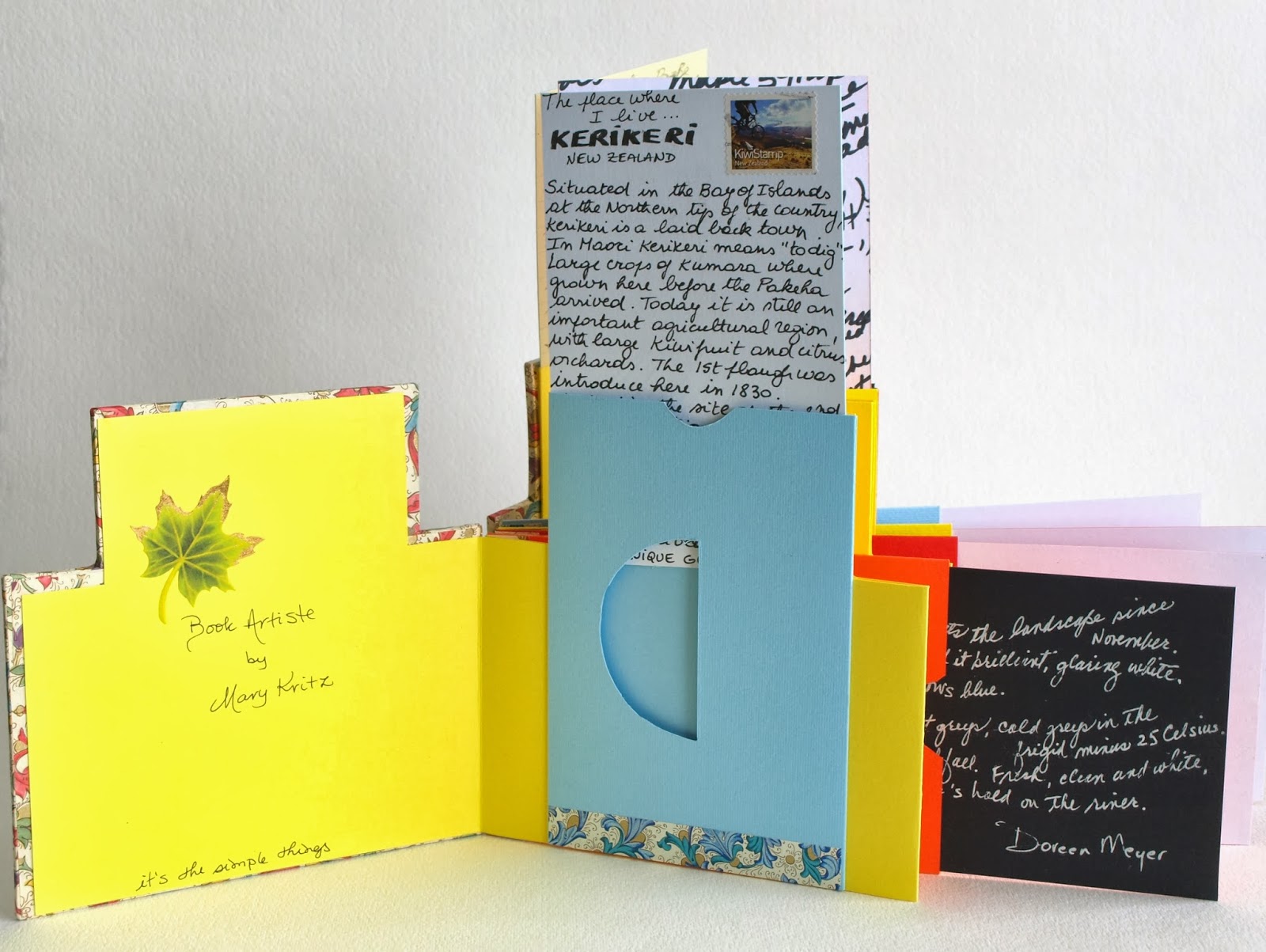 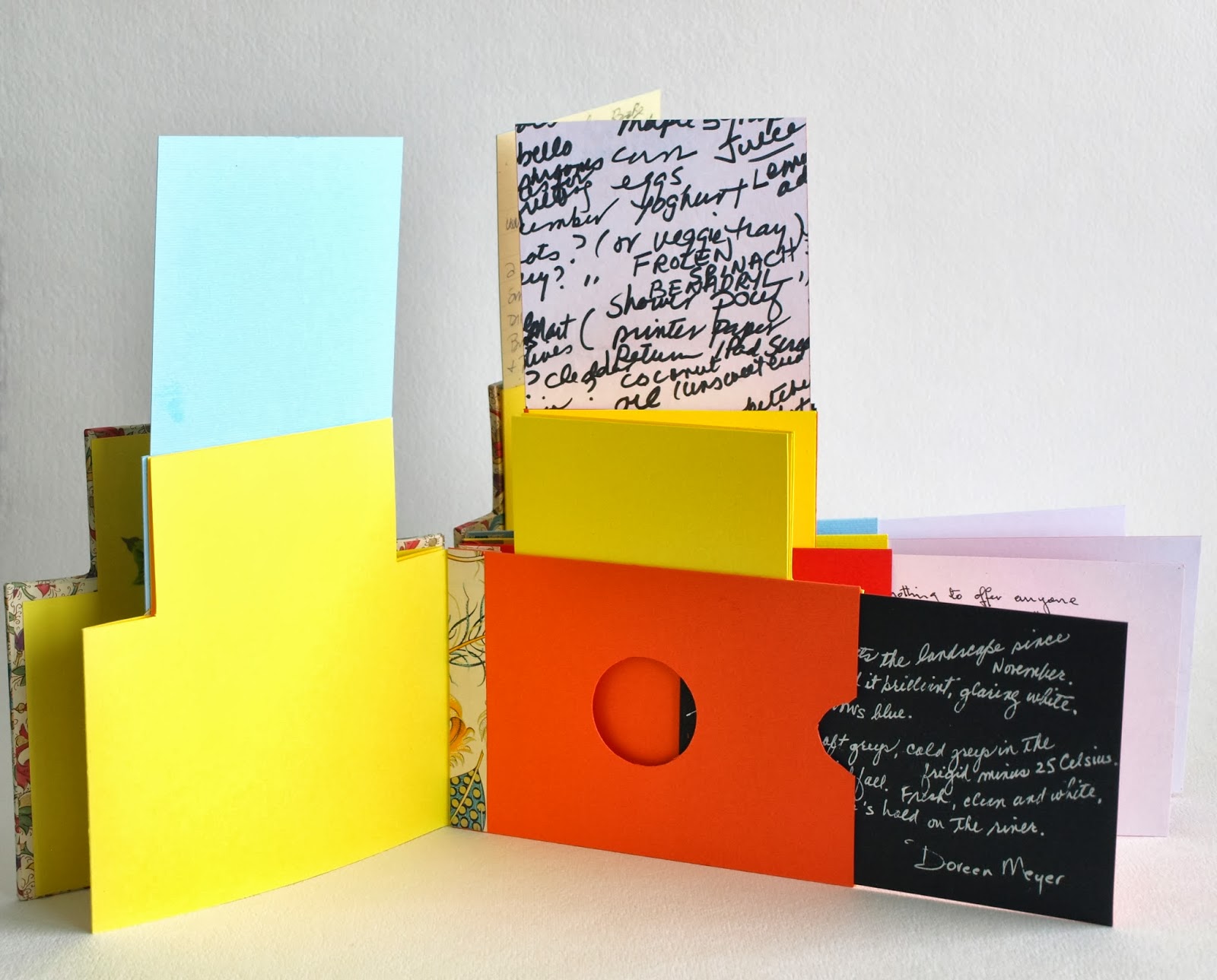 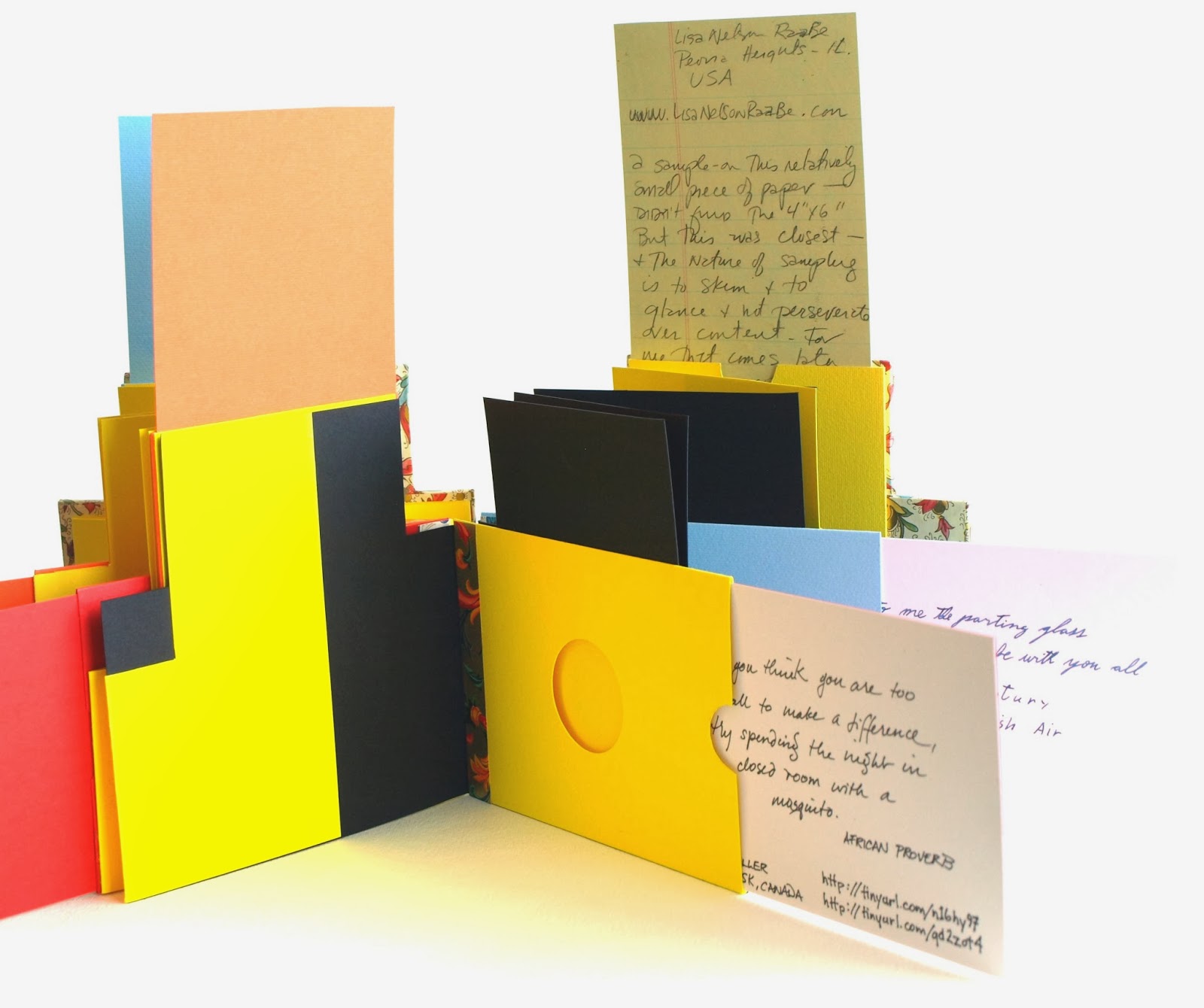 When pulled out of the sleeve, the handwriting sample may be viewed to a greater degree.  To view the complete text, the samples may be removed from the sleeve.

CONTRIBUTORS FOR WEEK ONE 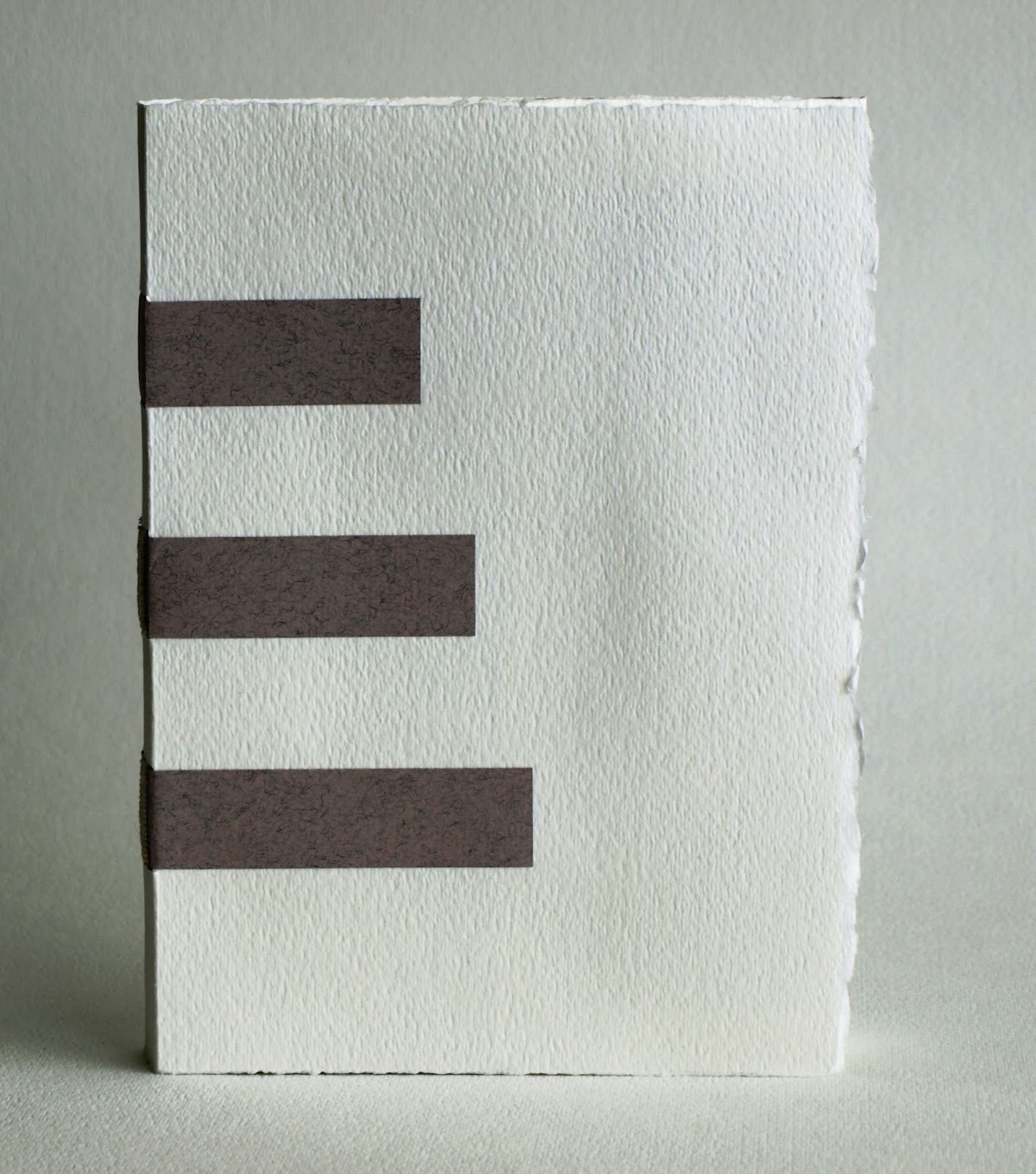 I used Strathmore Water Colour paper for the cover and pages of this book. The binding is long stitch and I used Canson paper for the tabs. 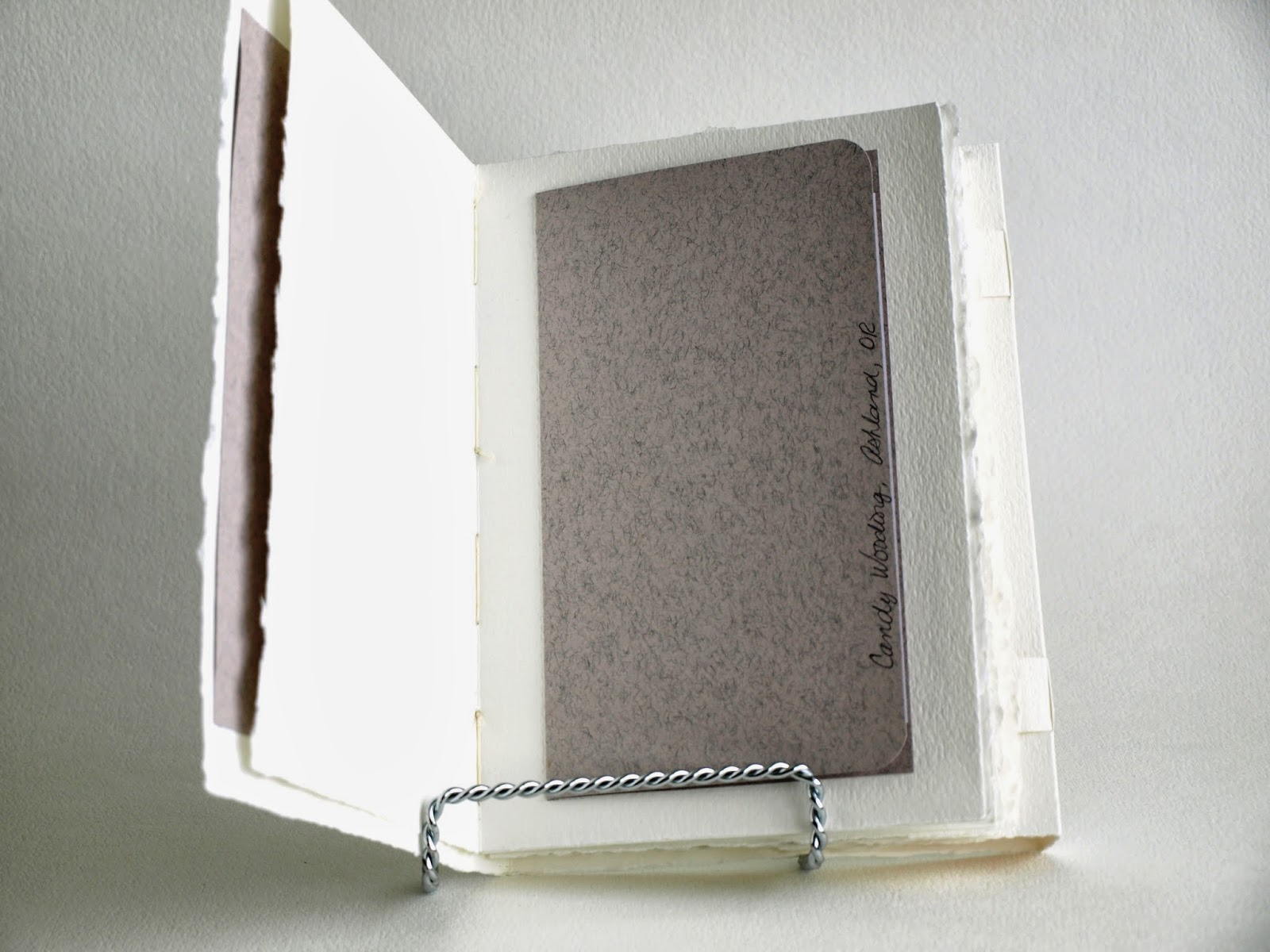 For each sample I used the Canson paper and created a simple 'book-within-a-book' type of effect.  I wrote the name and location of each contributor on the outside leaf of the sample.  When viewed, the viewer first sees who contributed the sample and where she or he is located.  Upon opening the leaf, the viewer is introduced to the handwriting sample.  I used both vertical and horizontal samples in this book, so when viewed it has to be turned to read some of the samples. 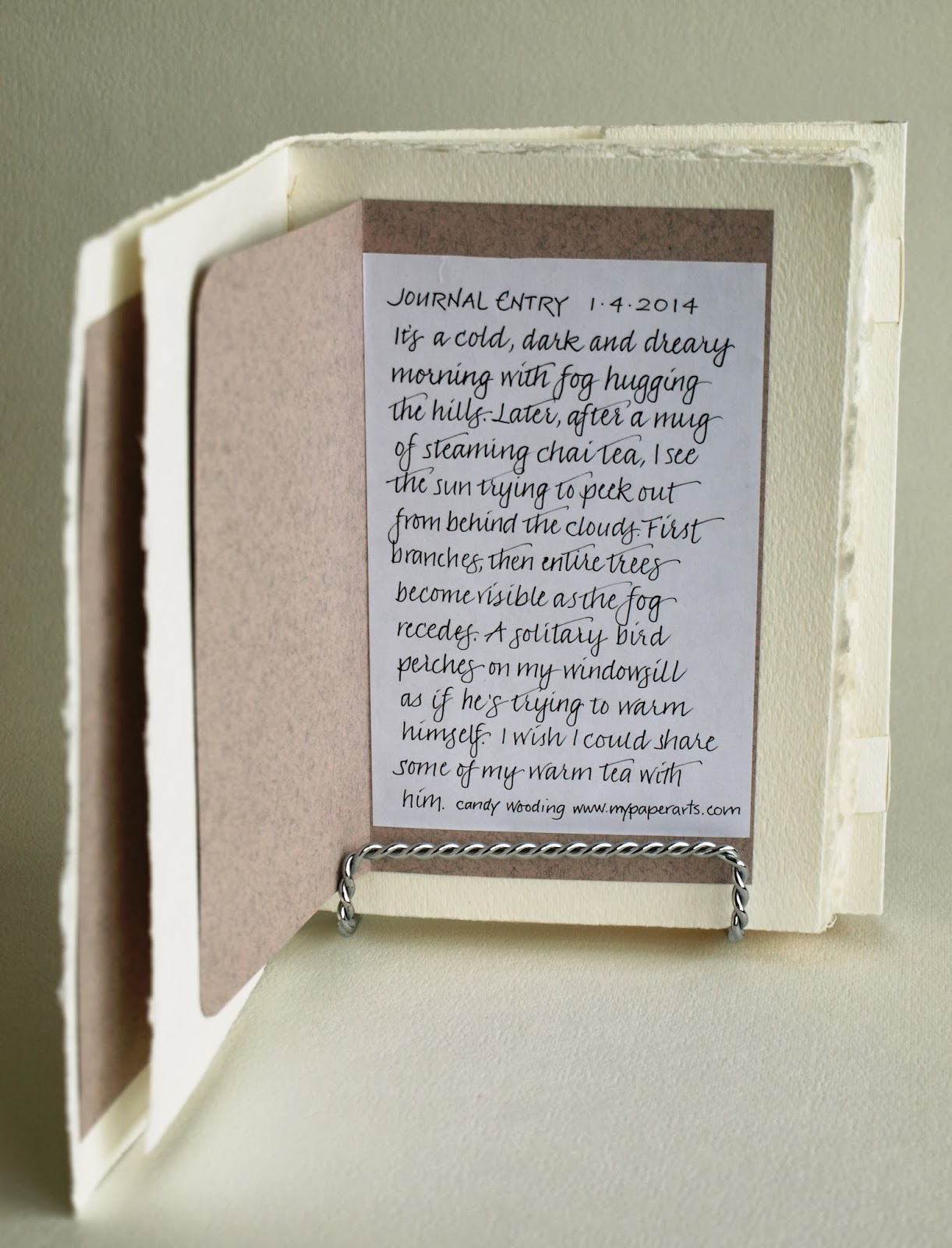 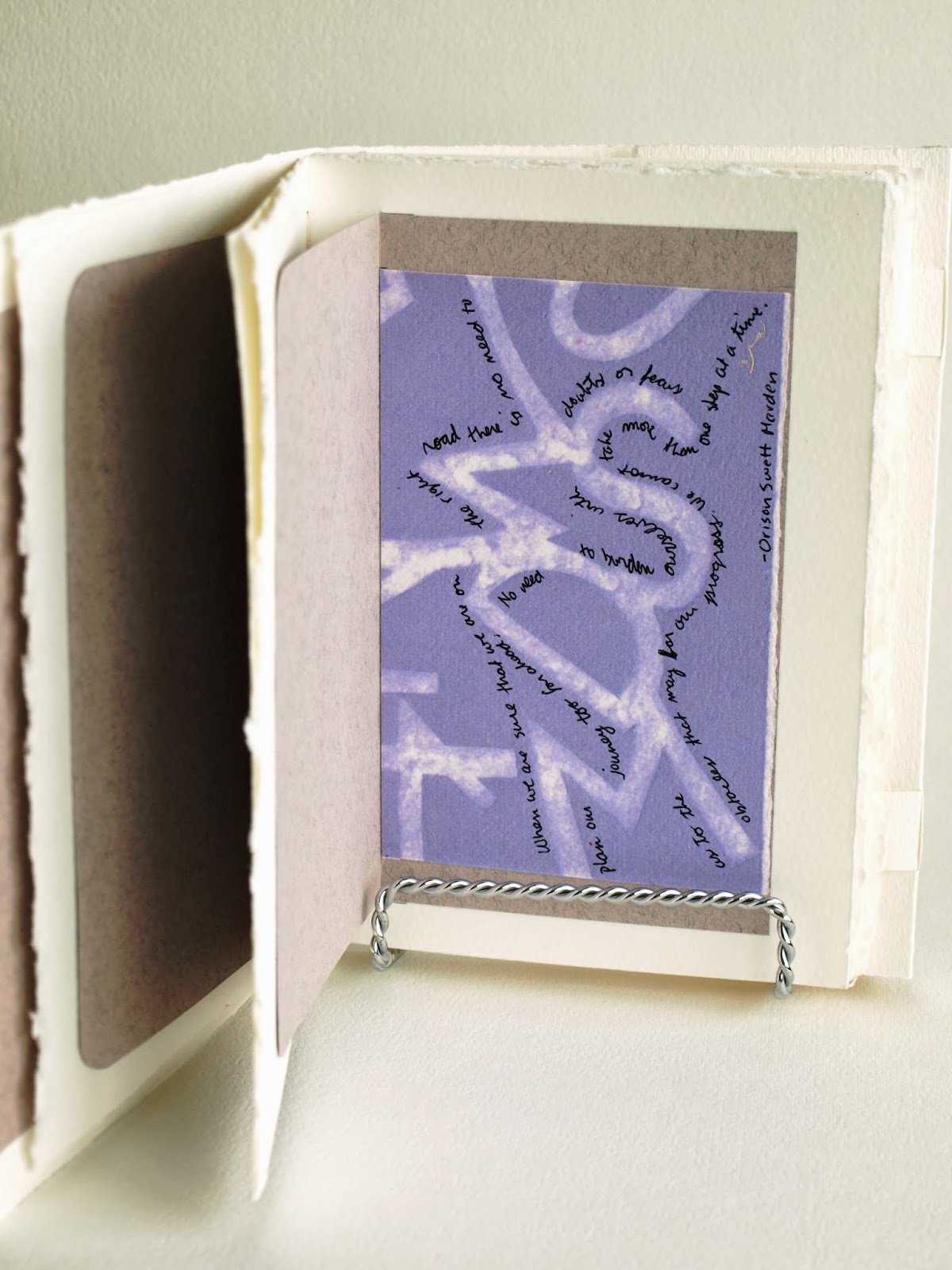 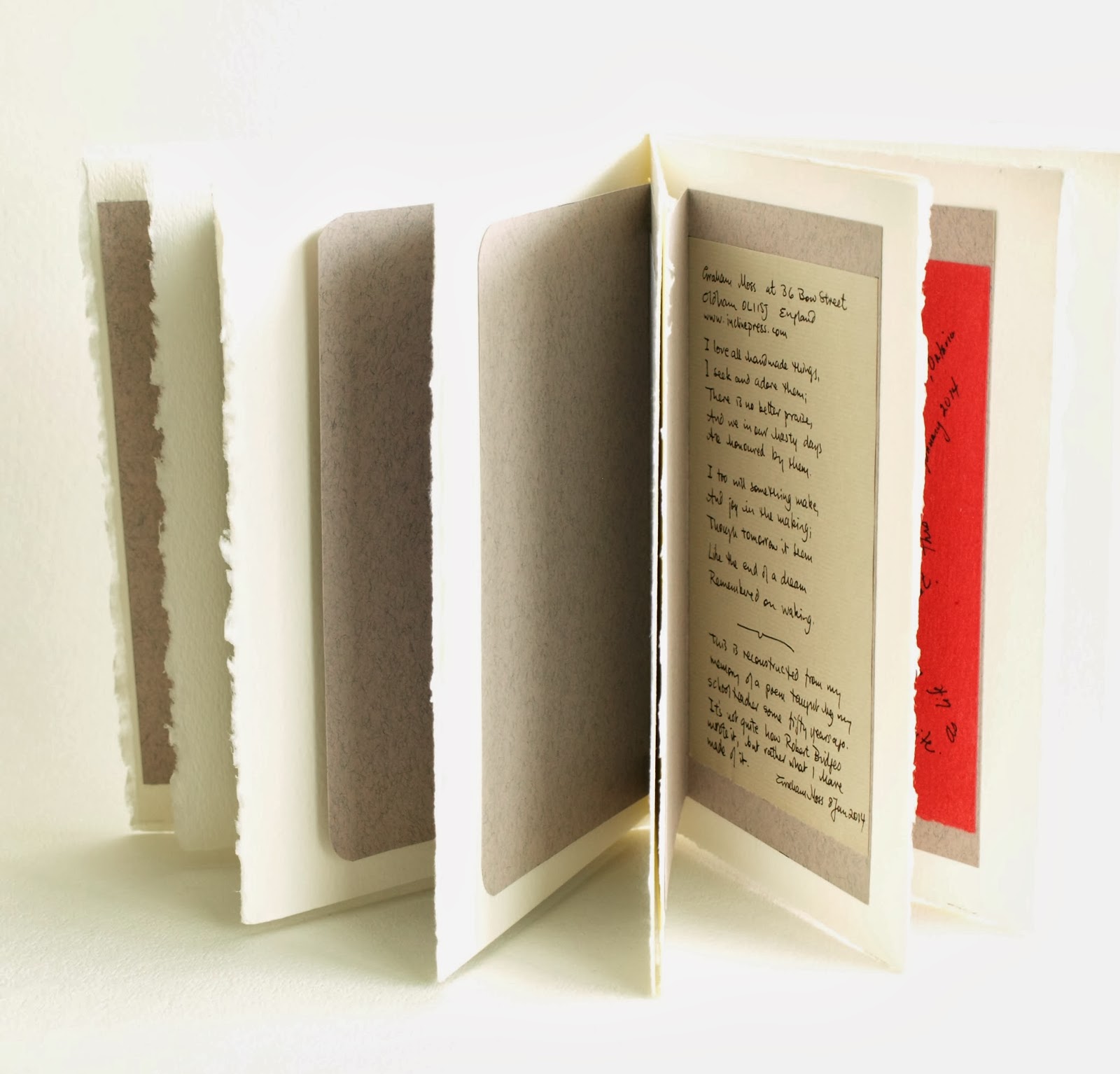 In 2013 I participated in a year long project called Photographic Dialogue, with Ginger Burell.  She started the project by sending us (25 project participants) a photograph one week and the following week we responded with one of our photographs; no words were allowed, nor could we talk about the picture.  The project is now complete, except for the making of the book.  This past month I have worked on my maquette for the book. 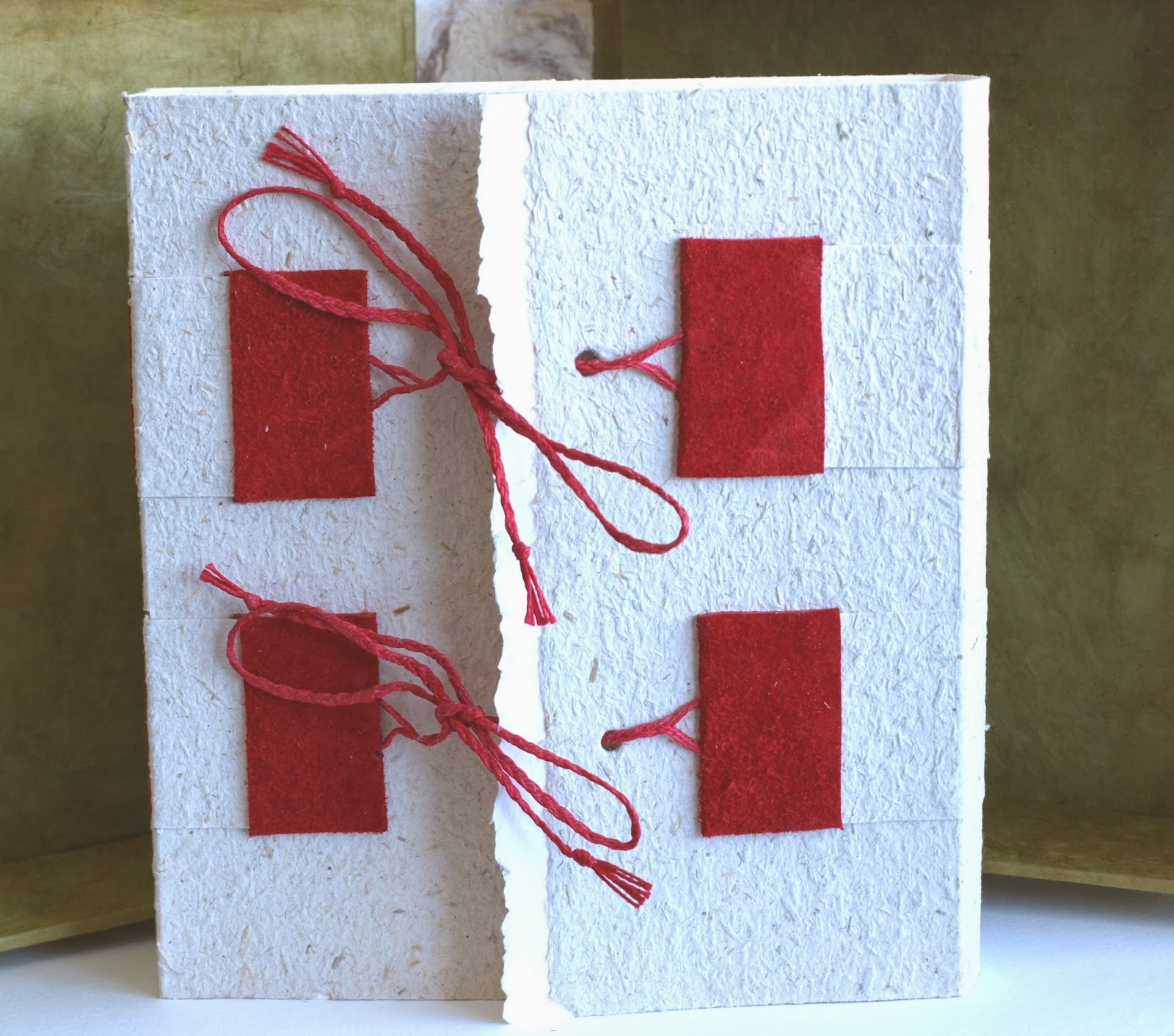 The cover of the book is made from St. Armand flax paper and lined with Canson sketch paper.  Straps circle the book and have red leather ends.  I braided waxed cotton thread for the closures and used a long stitch binding. 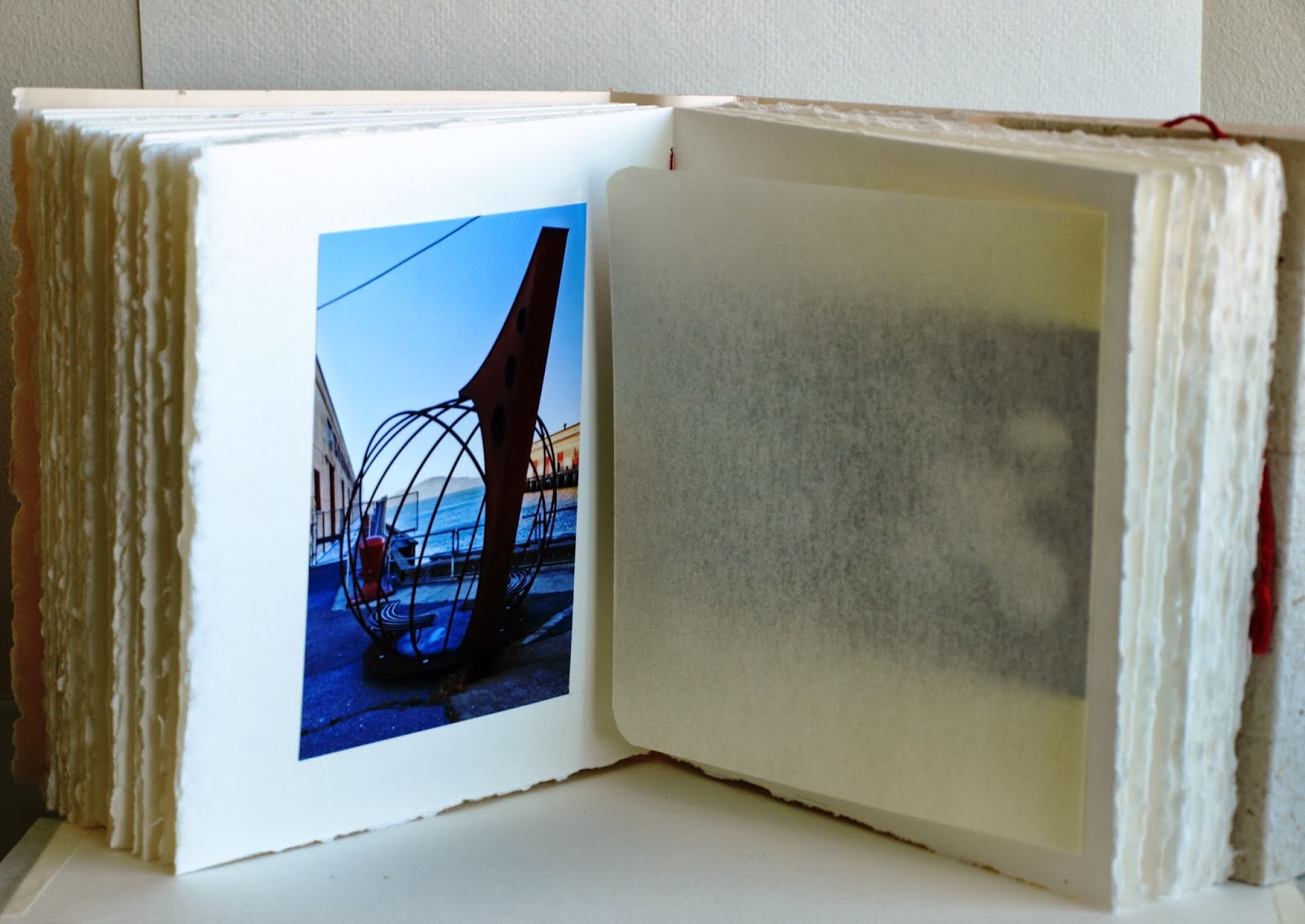 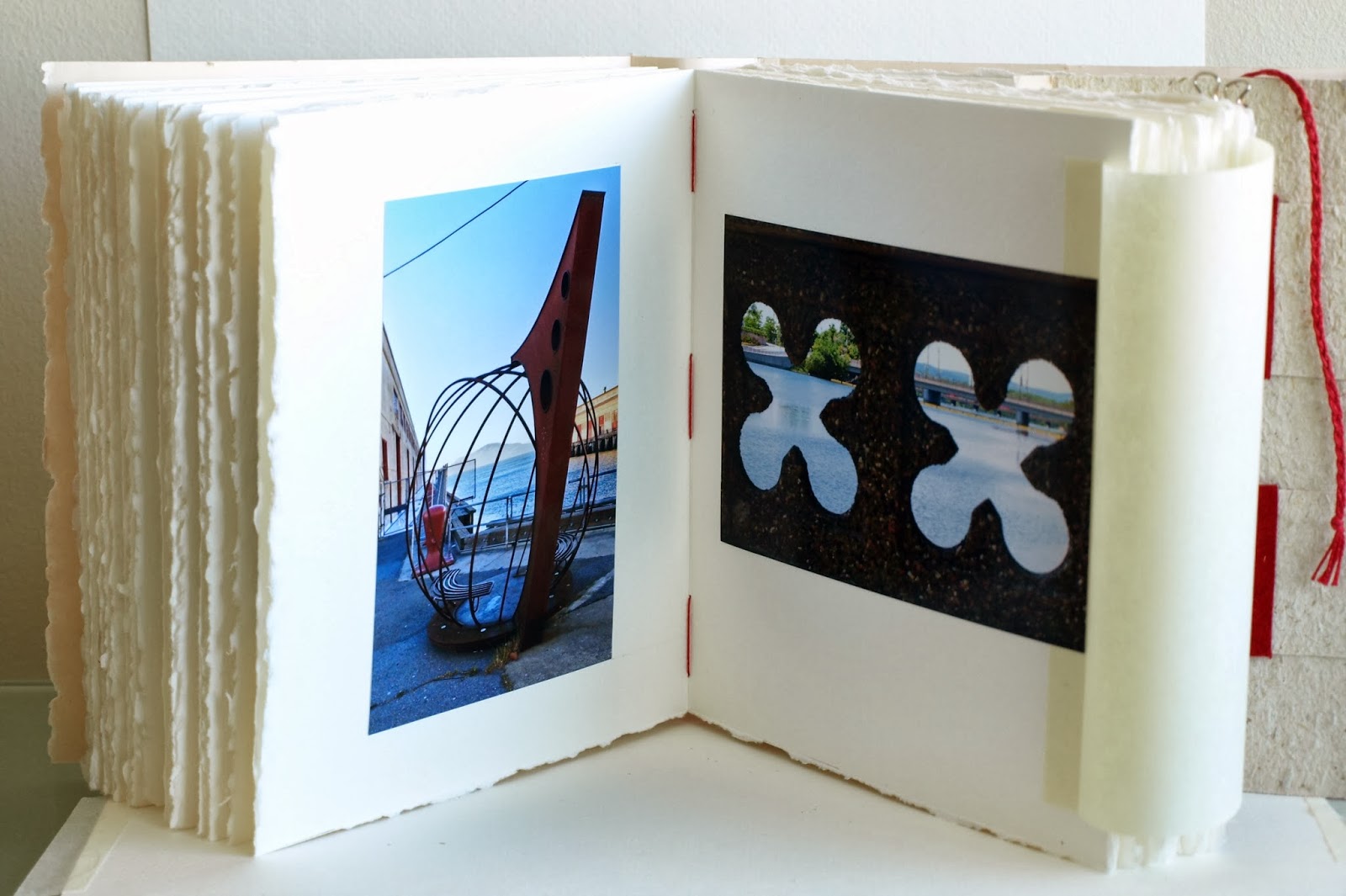 I used Strathmore Watercolour paper for the signatures and Fabriano parchment paper to cover one of the photos.  When opened, one sees a photograph and the hint of another photograph through the parchment.  When the partchment is lifted the dialogue is exposed. 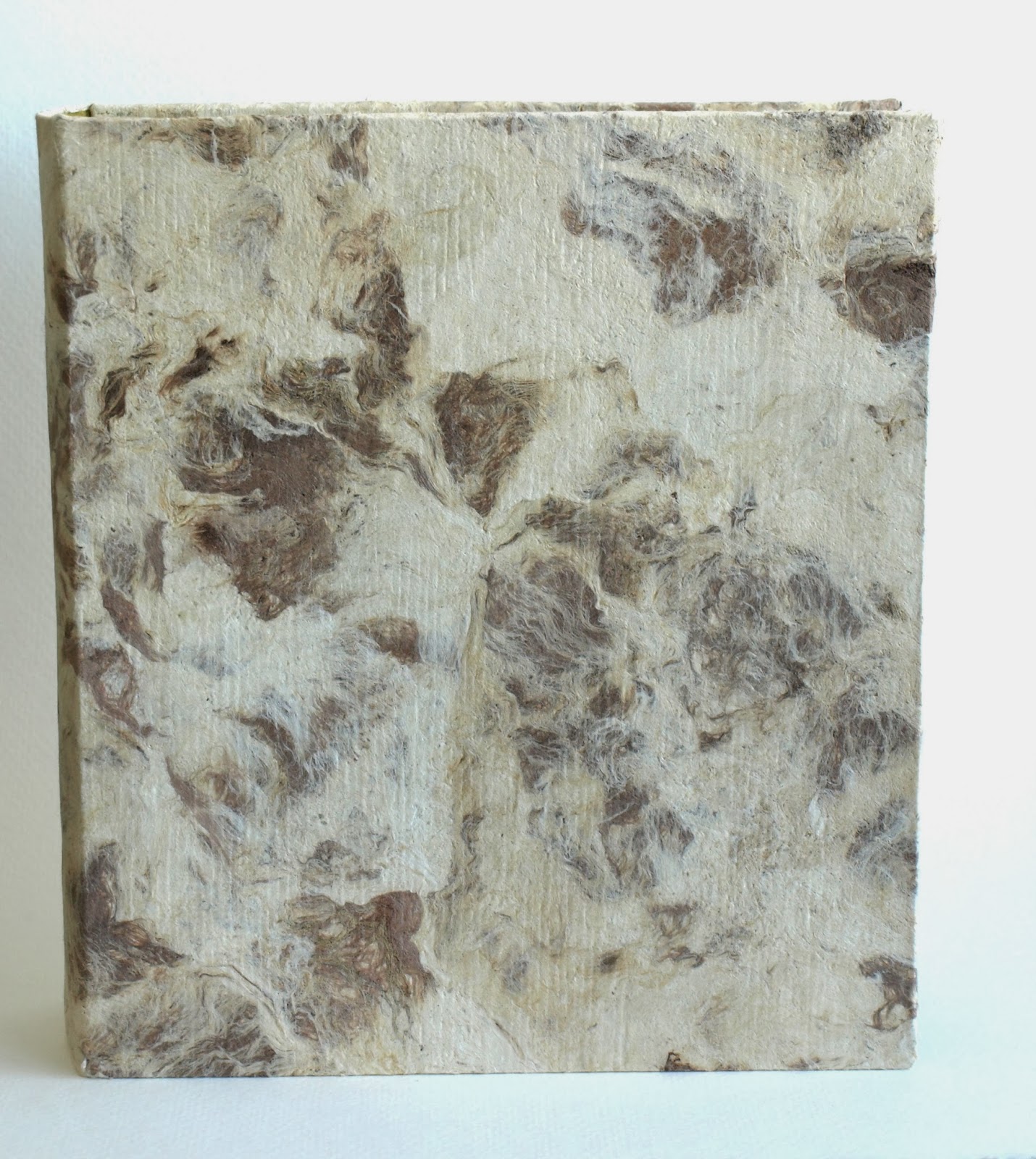 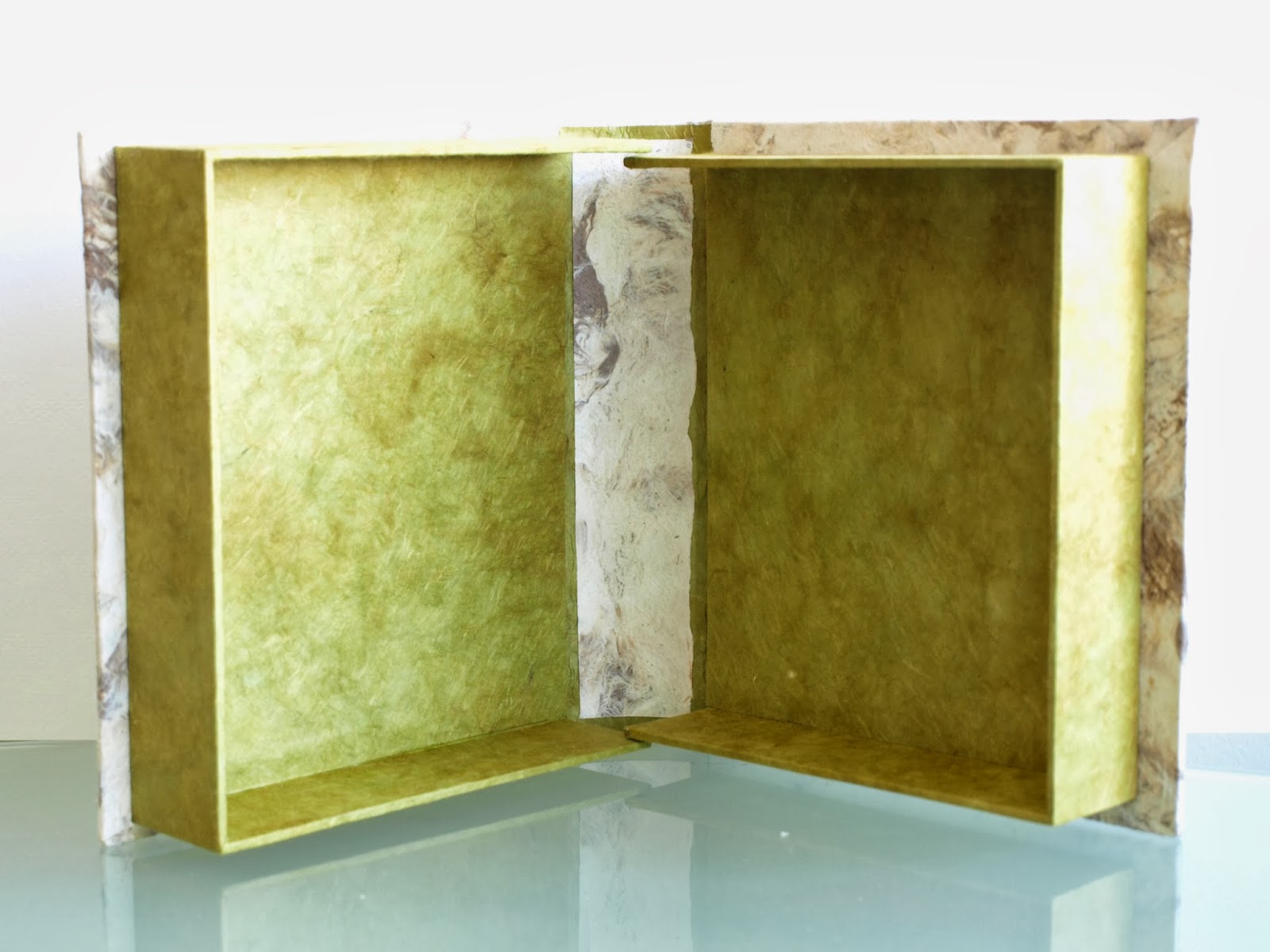 As the book has a light coloured cover and white pages I decided to create a clam shell box for protection.  I covered the box with amate paper (Mexico), a gift from a student, and lined the inside with Lokta paper (Nepal).

The Japanese Bound book and the Box making workshops were well attended and students went home with some beautifully crafted books and boxes.  The next course is in March: Print Making, Letter Press and Bookbinding, followed by Decorated Paper and Flowers and Folding books.  These workshops will take place in late March at the Ottawa School of Art, Orleans campus at the Shenkman Arts Centre.  Registration for these workshops is through the Ottawa School of Art.

March 10th to the 14th, at the Ottawa School of Art, George Street Campus, myself and Guillermo Trejo, a printmaker at the School, are offering a one week course in print making, letter press and bookbinding.  Participants will spend the first two and a half days learning print making and letter press and with their final results, they will make a limited edition of books, which they will bind in the last two and a half days.  The class is limited to eight participants.  Registration for this class is through the Ottawa School of Art.  Come out and join us for a week of creative fun.....

WARMTH, a group exhibit at the Cube gallery, is now open and will close on March 2, 2014.  I have a book in the exhibit called: The Cremation of Sam MacGee.  It is a double accordion book with a barge for the front cover and the stern of a sailboat for the back cover.  The vernissage was well attended.  I met some of the other artists and had interesting discussion with people who were curious about the book and how it was made. 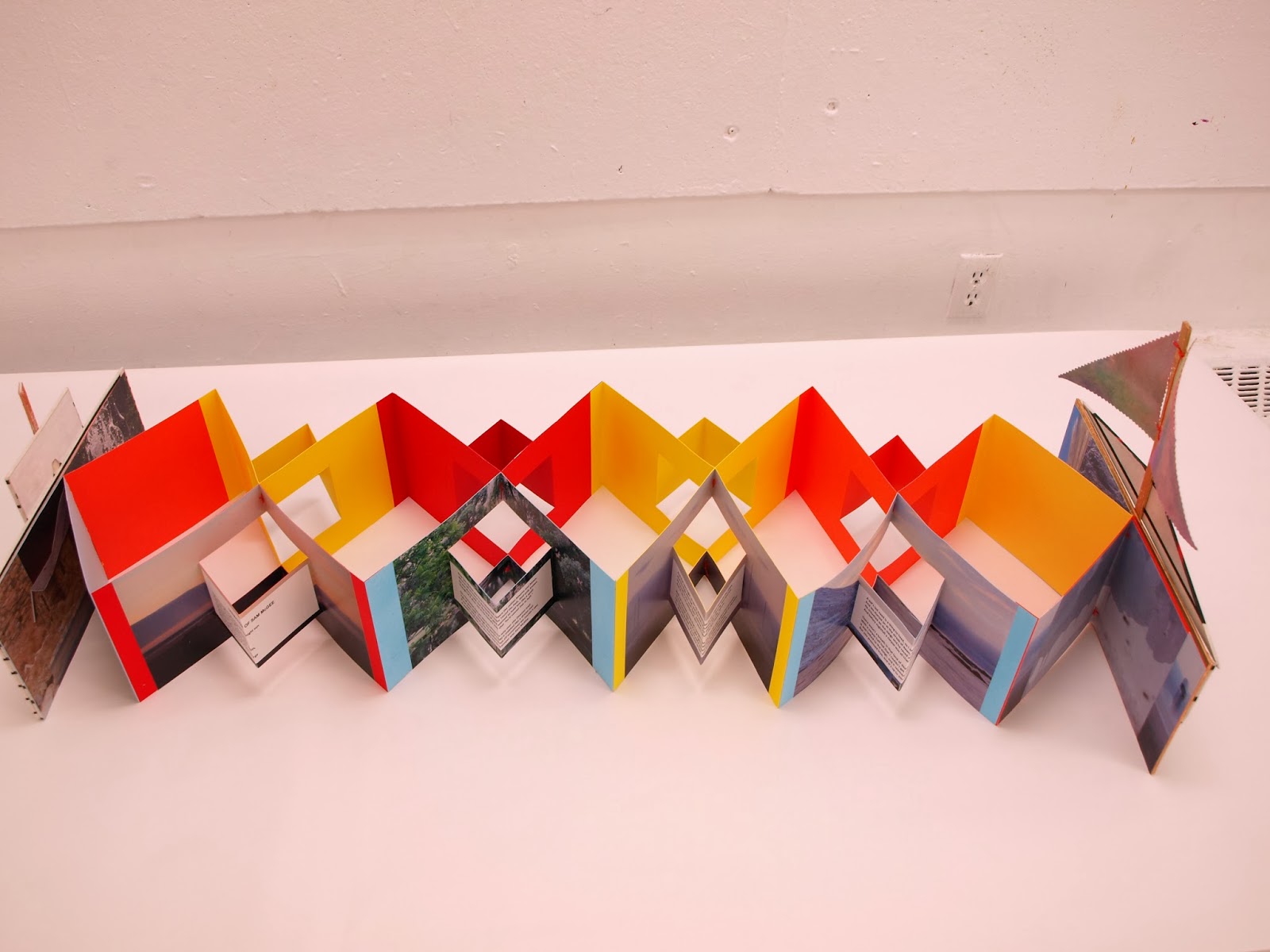 This is an aerial view of the book.  I used Fabrian card stock for the accordion portion of the book.  I used photographs from the arctic in response to the cold that Sam MacGee endured while moiling for gold.  Photographs of summer days and flowers were used to depict Sam's home in the south where it was warm. 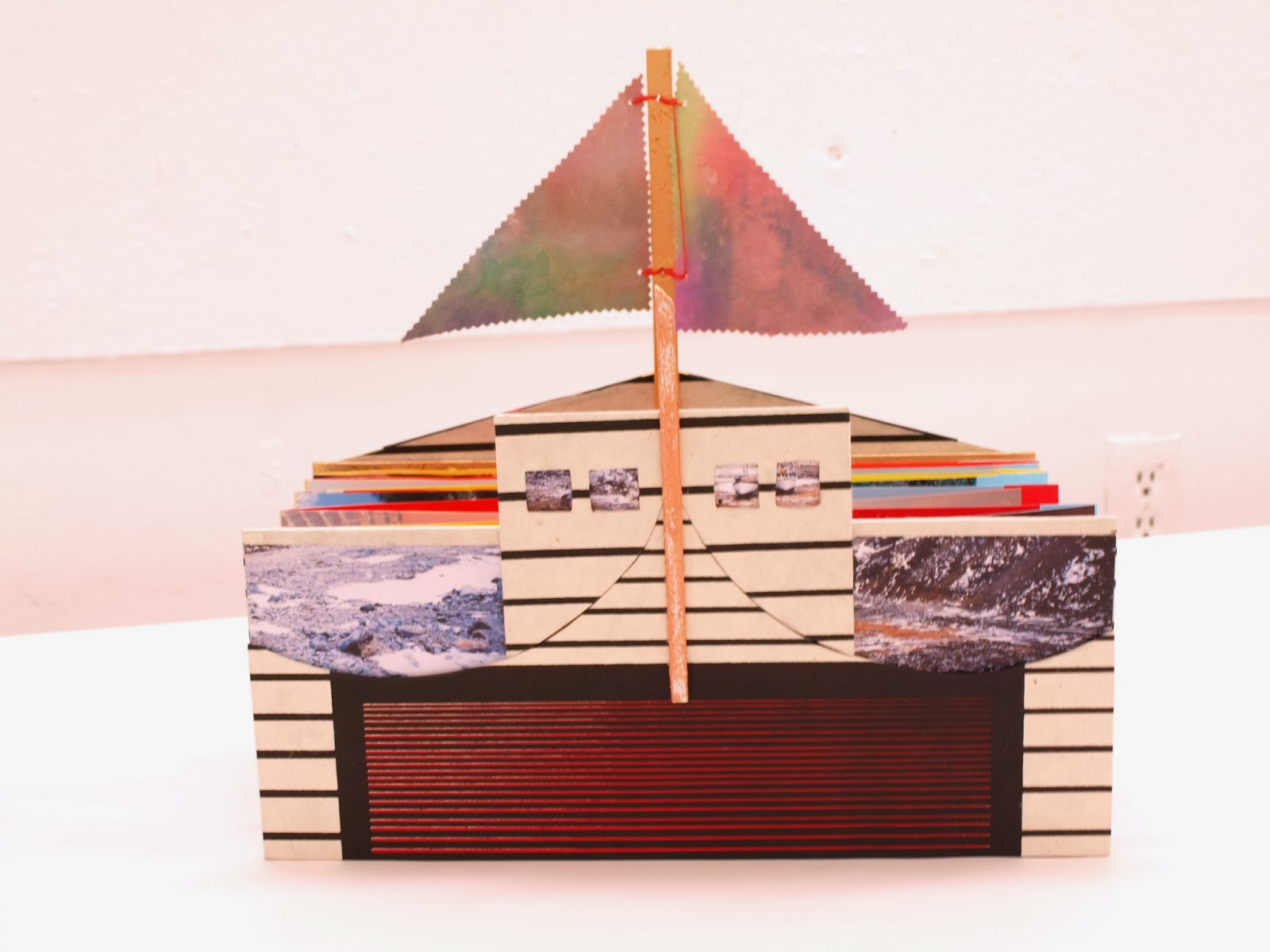 This is the front of the book, a barge.  Pictures in the windows are of boats I photographed on the shore in Kimmirut on Baffin Island. 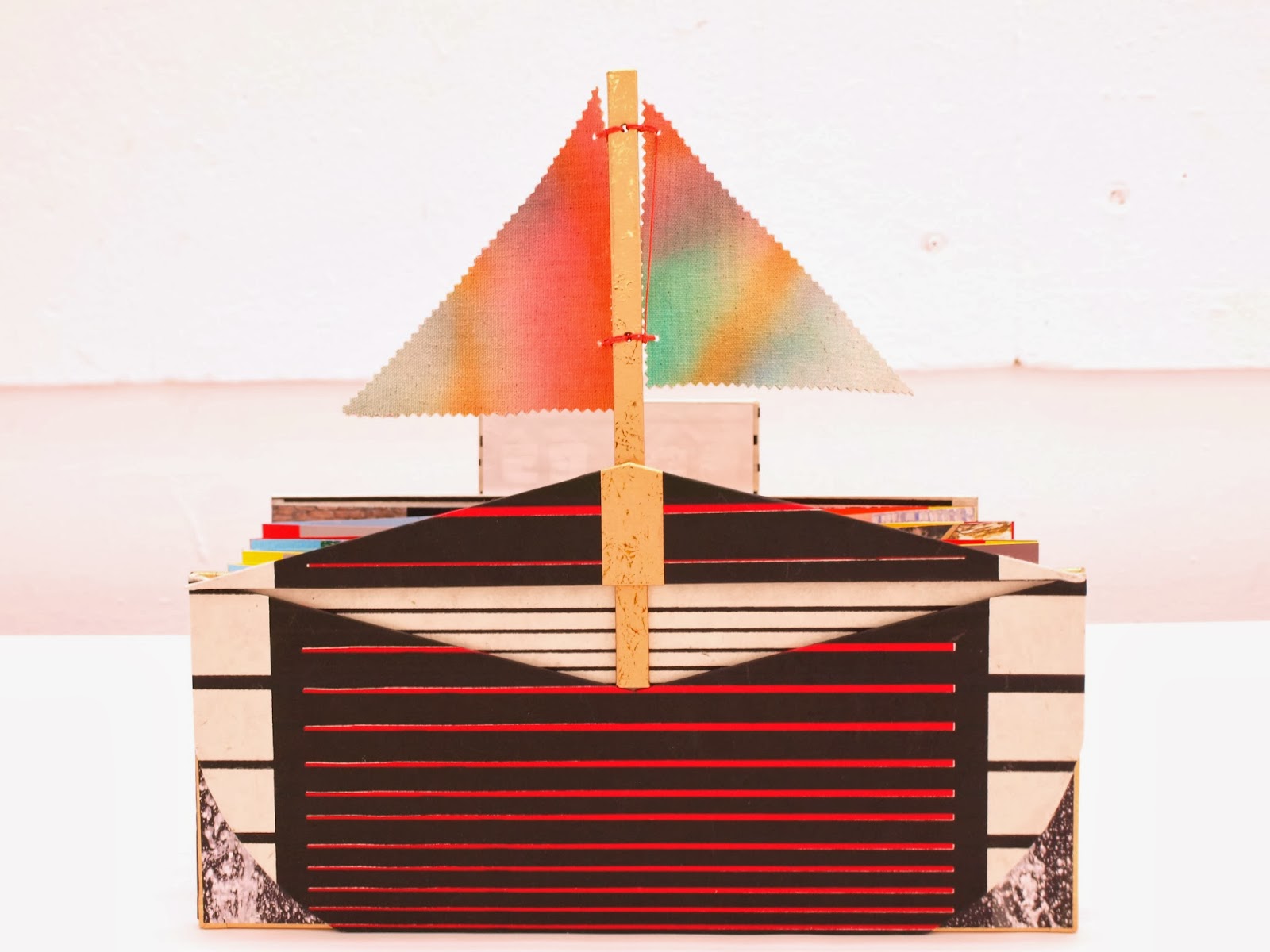 This is the back of the book, the stern of a sail boat.  I used hand decorated canvas for the sails. 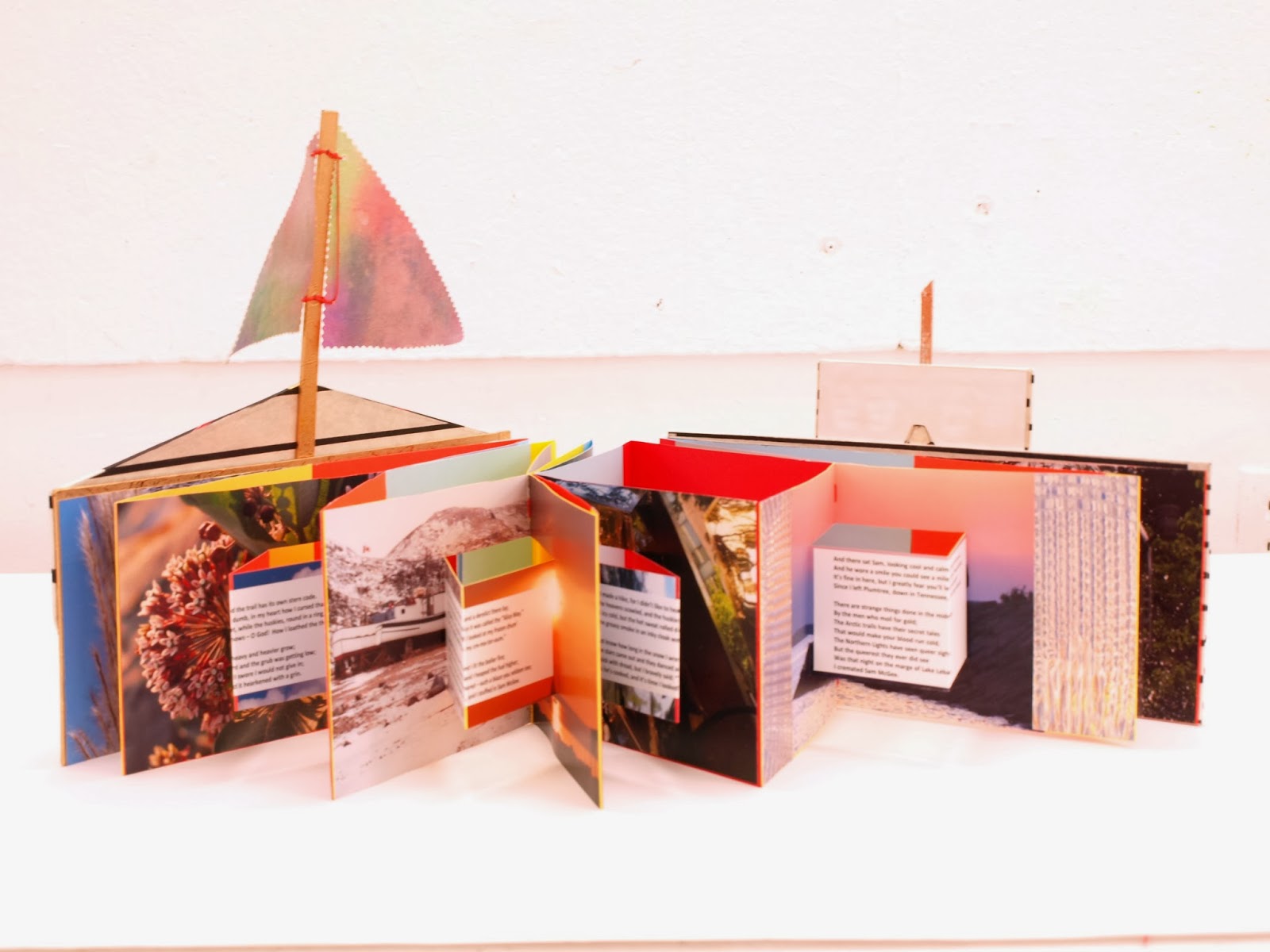 This is one side of the double accordion book.  I had a great deal of fun putting this together and the poem, The Cremation of Sam MacGee, by Robert Service, has been a favourite of mine since learning it in school, as a child.

That is all for now.  I hope you are enjoying our pleasant weather and bright sunlight.  Spring is just around the corner.

If you have any questions, please feel free to contact me at: bbinder999@gmail.com